Lake Louise Ski Resort is in Alberta, Canada in the Canadian Rockies, near the border with British Columbia. It is about one and a half hours drive to the west from Calgary and is one of the major resorts in Banff National Park and Canada. 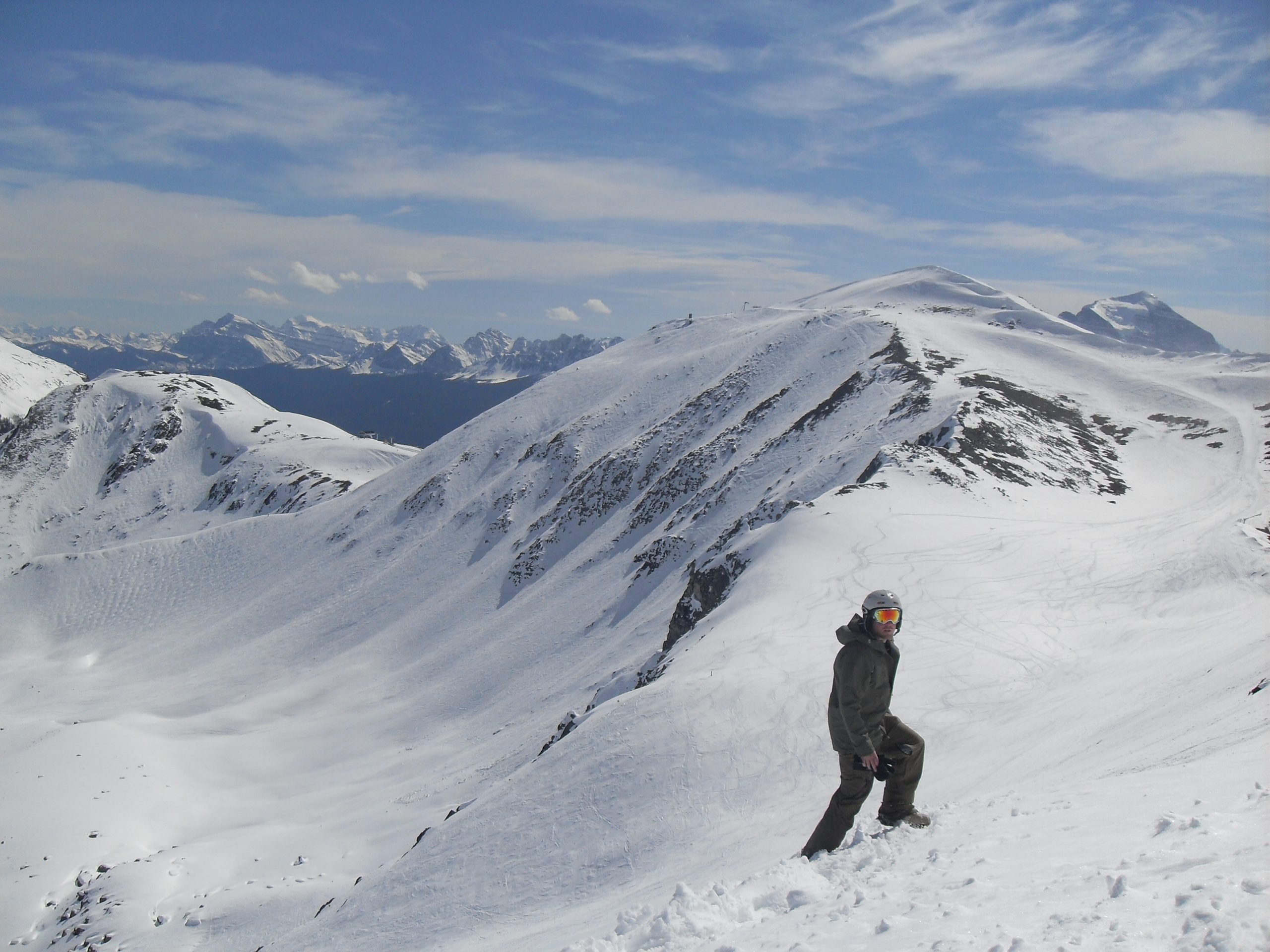 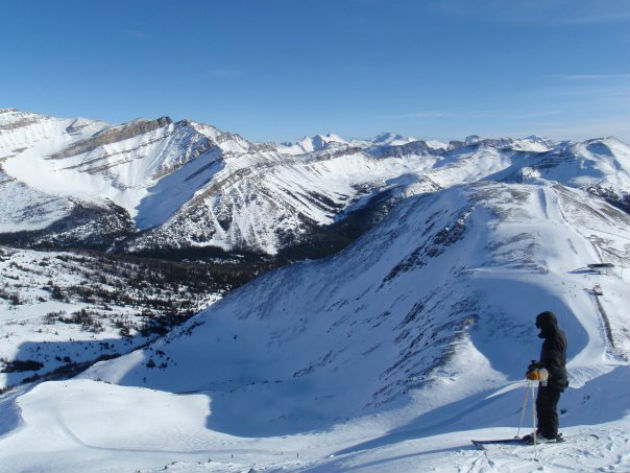 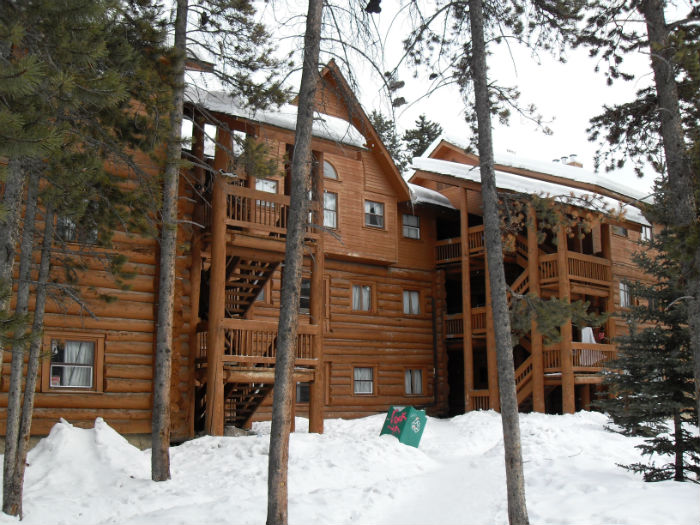 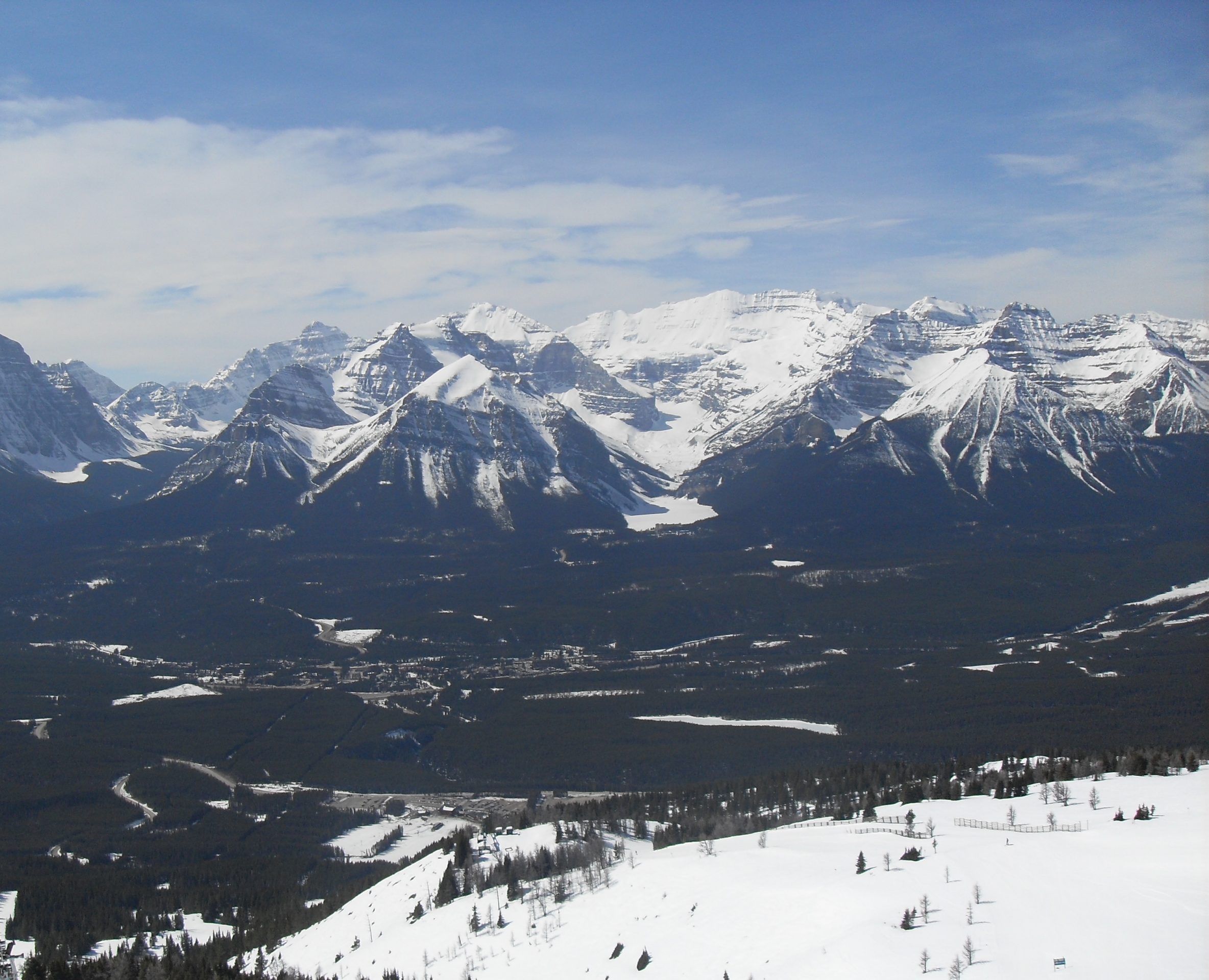 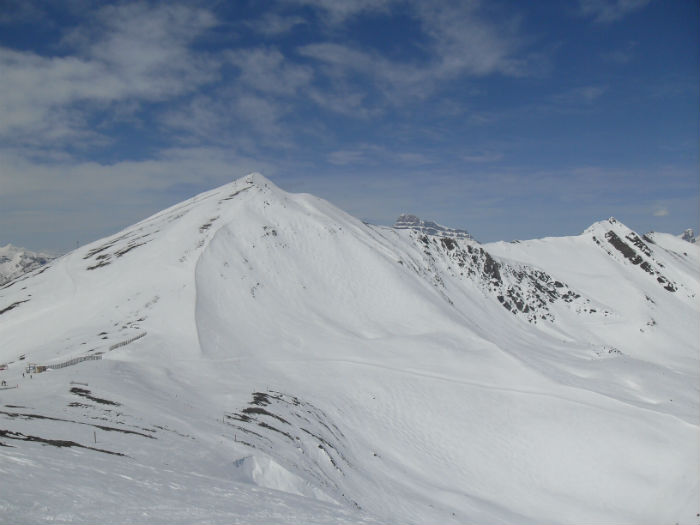 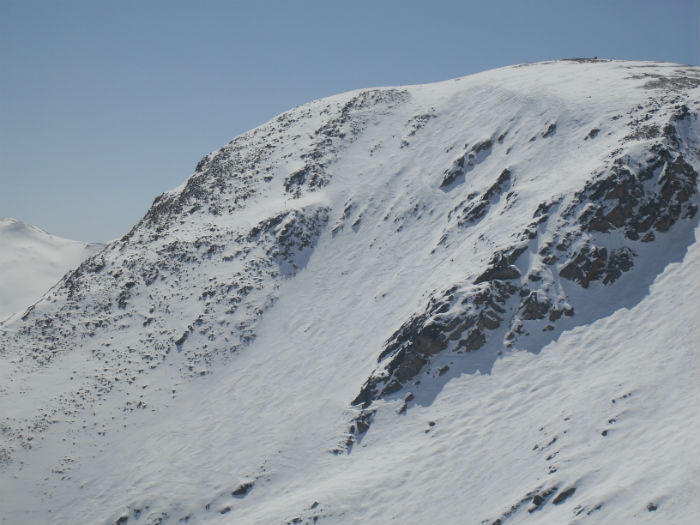 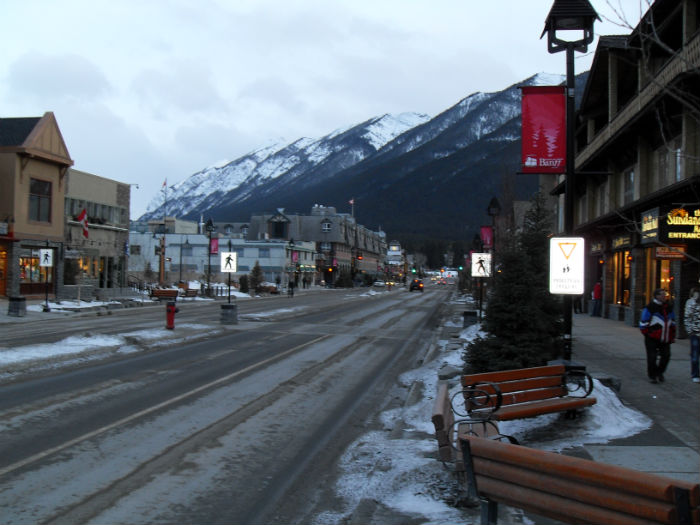 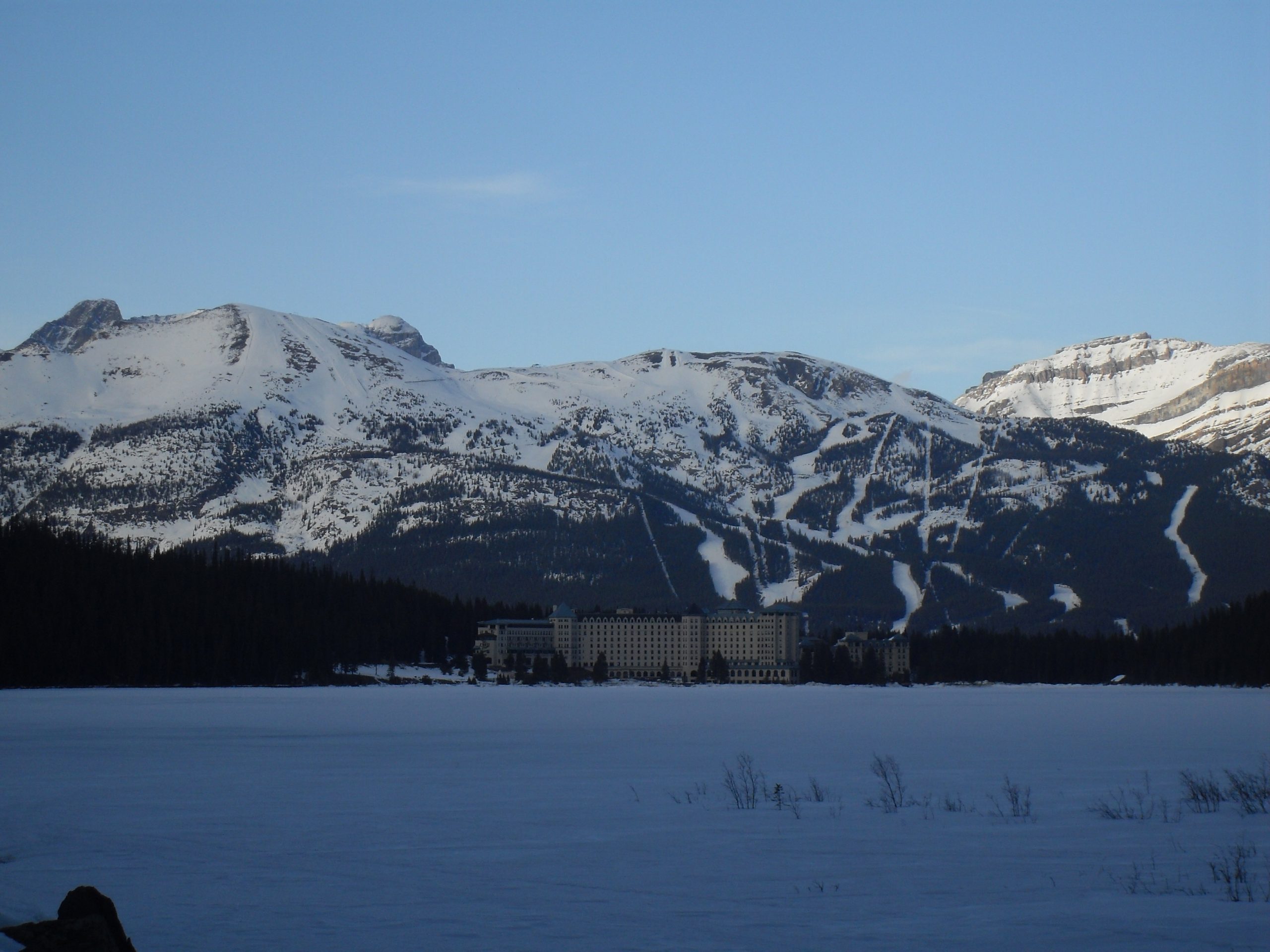 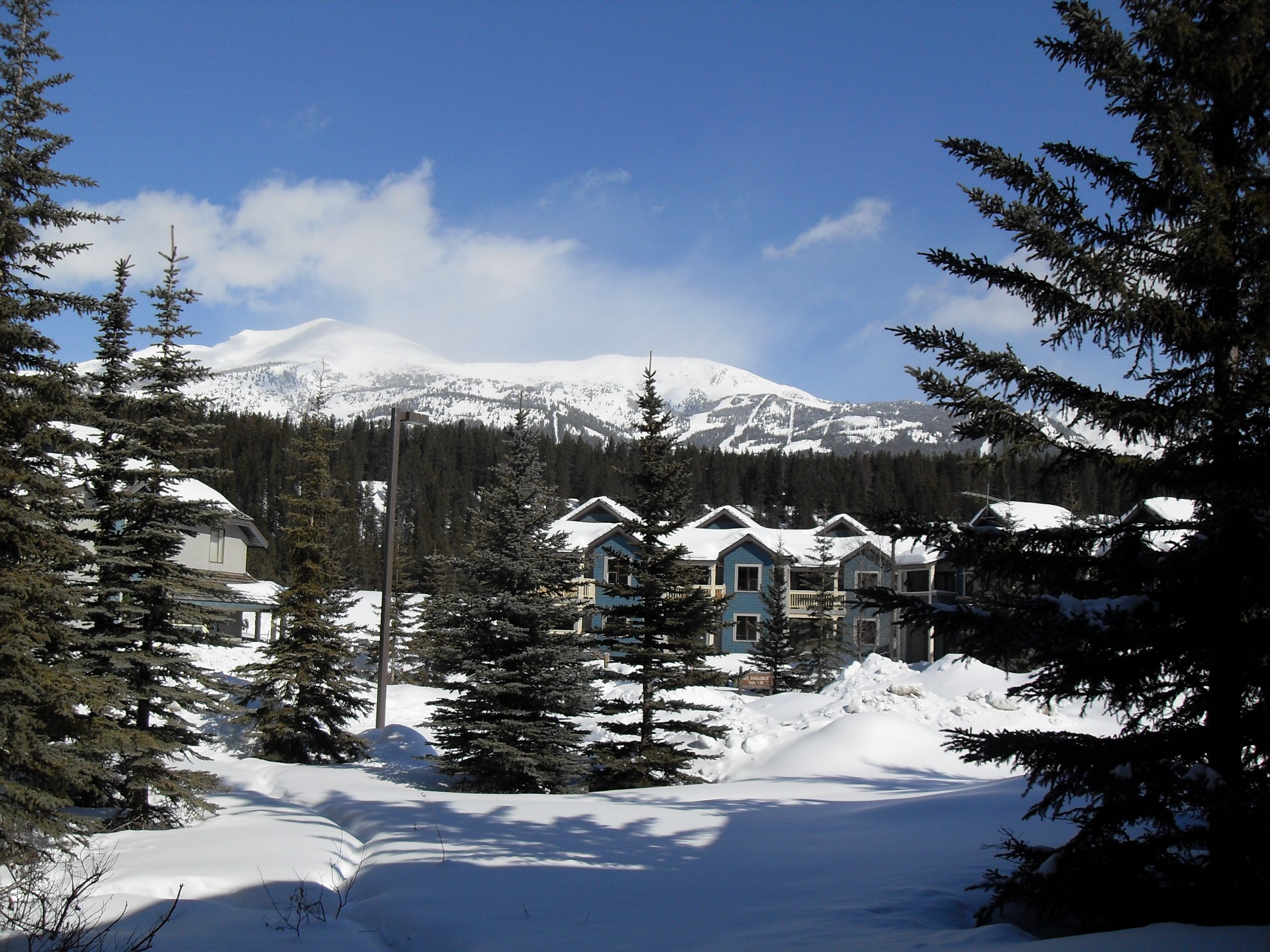 The Terrain at Lake Louise

Lake Louise is one of the major resorts in Canada and has the second largest terrain area after Whistler. It is larger than the other two mountains in the Banff area, Sunshine Village and Banff Norquay, and probably has the best terrain out of the three in terms of steeps and chutes.

Sunshine Village has, no doubt, some excellent steeps in Delerium Dive, but these are not open as much as the steeps and chutes over the back at Lake Louise, which is a bigger area by itself than many Canadian resorts. The crowds are never huge, especially on the steeper parts of the mountain.

The front side is mostly beginner and intermediate terrain and is where a lot of the cruisers are on the mountain. There are some sweet long rides for snowboarders, although it can get icy when there has not been enough snow as the sun bears down directly on that side. However, the back bowls are absolutely awesome with great steeps and chutes, and on a powder day you would barely hit the front side unless you were coming back in. There is enough on the back side to keep you going for several seasons, including a ton of places to hike to get fresh stashes.

Eagle Ridge off the back of Lake Louise (where the Paradise chair is) has so many lines, mini hucks, and other natural features that you can spend days discovering the terrain, while the runs off the back of Mt Whitehorn get less tracked out as the only access is via the Summit Platter from the front side – a treacherous tow that has led to the downfall of many a rider!

There is a third section to the hill, the Larch area, which is a fun area for intermediates. On ride breaks, you are less likely to get there as it is quite far from the base, but there is good terrain for practising your carving.

Canada is big on backcountry and Lake Louise is no exception. There is good backcountry access into West Bowl, which lies outside the bounds of the resort, from the top of the summit chair. There are avalanches each year, however, so taking the right avalanche gear is important. On a powder day, you can find fresh tracks for most of the day if you are willing to hike along the ridges.

The terrain park is relatively small compared to other mountains, but there is enough in a season for people of a lower to intermediate standard wanting to work on their style. It’s located near the base of the mountain.

Average snowfall is 3.6 metres (140 inches), which is lower than other resorts in the Western Canada. It gets super cold at Lake Louise – in December and January, it is not uncommon to see the temperature dip to -30c (-22f).

The season opens early November for the World Cup downhill race, but the season gets going properly in early December when many of the runs on the mountain start to open up. The mountain closes early May. The season is longer than other Western Canada resorts due to the lower temperatures as compared to other mountains.

Some of the best weather doesn’t come until February or March when the temperature starts to climb. The avalanche crew do all they can to continually open new runs, and some runs have been known to open with only a week left in the season.

Getting a Job at Lake Louise

Winter jobs get posted on the employment page of Lake Louise around September, which is the best time to look for work for the upcoming season. Interviews take place at the hill.

Most start dates will be between October 24th and December 15th and finish dates between April 15th and May 10th. They look for you to commit to the whole season when hiring.

Every year a number of people simply arrive at the resort and submit their resume. There is an influx of people looking for winter season jobs in the Banff-Sunshine-Lake Louise area.

You will increase your chances of finding a job if you are able to arrive before the season starts, as there are always a lot of applicants at Lake Louise. If you aren’t able to find work at the hill, you can also submit your resume at the many shops, restaurants and bars around Banff.

Lake Louise does not sponsor international applicants for a Canadian visa. As such, the only way for international workers to get a visa is through a Working Holiday Program. Work a Canadian Snow Season has further information on visas.

Lake Louise partners with a few international programs such as Overseas Working Holiday which can help you get a job at Lake Louise. OWH is available to people in Australia, New Zealand and the UK. While many people use this program each season, there are many more who simply turn up in Banff and start handing out resumes. The fees are currently $995 AUD and £599 UKP. Work a Canadian Snow Season has further information on this program and others.

Where the Staff Come From

Always a lot of Australians, with a handful of Europeans and New Zealanders. Many South Americans come and work at Lake Louise each year.

Although a good level of English is needed for customer jobs such as the rental shop, you don’t need to be fluent to work in other jobs such as in the car park, in food and beverage and cleaning. There are an increasing number of Europeans such as Germans and Czech coming to work in Banff.

With a Lake Louise staff pass, it is possible to go to Sunshine Village, Fernie, Kimberley and Nakiska for free. The hill organizes several trips during the season to other mountains. There are also a bunch of other perks including:

Minimum wage in Alberta is $13.60 an hour and most entry level jobs will pay around that. Rent is automatically taken out if living in staff housing which translates to about $$250 a week off which to live.

Lake Louise is an awesome mountain at which to work a season. The terrain is excellent and, being a fairly well-known mountain, Lake Louise gets in workers from all over, meaning a pretty fun crew to work with over the season. The Canadian Rockies are beautiful and you are within driving distance of a bunch of other great resorts such as Sunshine Village, Revelstoke and Kicking Horse.

In terms of jobs, working in the car park is a surprisingly great job. You usually work in the morning directing in traffic, which leaves the afternoon free to ride. The rental shop is pretty fun with a great crew, and ride breaks on most days except over the busy Christmas period. The repair shop is great if you can get a job there as they often work night shifts which leaves the day free to ride. For those in food and beverage, tips are best at Sawyers Nook, on the backside of the hill. Check out Jobs Available at Mountain Resorts for further information on the types of winter season jobs on offer.

As with any outdoor job, it can get bitterly cold if you are a lift operator, ticket scanner or ski instructor, so be prepared. Lake Louise supplies excellent, warm uniforms for all its staff.

Many people also worked at the Fairmont Chateau, which is the large hotel on the edge of the lake of Lake Louise. This is good work and can lead to large tips given the guests passing through.

Accommodation for the Winter Season

The town of Lake Louise is a tiny village with nowhere to rent for the season. As such, most staff live in staff accommodation, unless they have a car and can live down in Banff – 45 minutes drive away.

The main staff residence is called ‘Charlestown’ or ‘Chucktown’ and is offered at $8.50 a night. The accommodation is generally 8 people to each apartment, with 1 bathroom and 1 kitchen to share.

There is a common room and a small gym upstairs. Other staff residences around town include Saddleback, which has more spacious rooms but is a smaller residence, and the ‘4-2s’ which is another smaller residence. The hostel in town is also used by the hill to put staff up before moving into staff accommodation.

There is one supermarket but it is very expensive and not practical to shop at other than for small items. Banff has a Safeway and is the best place to shop. The hill organizes weekly shopping trips, otherwise your best bet is to drive or hitch a ride.

Although it is an international resort, Lake Louise is fairly quiet. The town of Lake Louise is a tiny village with one row of shops, one bar, and one small club in one of the hotels in the village. The ski area is a few kilometers up the road, and a bus takes staff and guests up and back each day.

The base of the ski hill has only one building which houses a cafeteria, a rental, retail and repairs shop.There is no real apres-ski at the hill, just a few quiet bars to kick back with a drink and nachos after a day riding.

Staff housing is pretty fun with a few hundred staff living together and there are quite a few house parties that happen through the season given the lack of places to go out in Lake Louise itself. There are also always people to hang out with in the common room and play pool, table tennis or go to the gym.

Banff, on the other hand, is a town of several thousand and is one of the best resort and party towns in Canada. Most visitors to the area stay in Banff. There are a ton of bars, clubs and restaurants. You will need a car to get down there for the most part as, although there are Greyhound buses, they don’t run that often and not that late. The bus into Banff is about $30 return.

Other Tips for Working a Season at Lake Louise

If you are going to be in Banff for a while, it might be worth buying a cheap car. It will give a lot of flexibility to move around to other hills, to shop and to see other towns such as Calgary. The best deals on snow gear are found in Canmore, which is another 20 minutes from Banff, and the capital Calgary.