While notionally a Lake Tahoe resort, you won’t get any views over the lake at Kirkwood. The resort lies around 34 miles from the shores of Lake Tahoe (and Heavenly Ski Resort).

Instead, what you will find is some of the best snow in the Sierra Nevadas, some of the best terrain in the Tahoe area and a fairly no-frills resort without much in the way of nightlife or bars.

Unfortunately, buses around the Lake Tahoe area are a bit of a mess. There are public buses that run from Reno to South Lake Tahoe, but nothing going from there to Kirkwood. From San Francisco, you could take the Bay Area Ski Bus. A one-way ticket is around $90.

The town at Kirkwood is very walkable once you get there, although it’s handy to have a car if you want to get to South Lake Tahoe for better shops or a bigger night out once in a while.

Kirkwood has a small-resort vibe with a correspondingly laid-back attitude among staff, managers and tourists. You won’t find fur coats and boutique retail at Kirkwood and you could definitely say the vibe is toned down.

The village is very small, with just a few bars, restaurants and shops and not much in the way of accommodation. Some of the bars only open up on the weekend. The après scene is not very big, and there are not many events on the winter calendar.

The resort feels very remote and you can really find your solitude at Kirkwood. However, if you want a bit more action during the season, you are able to live in South Lake Tahoe, as Kirkwood has a free staff shuttle from to get you to work each day.

Aside from Squaw / Alpine, Kirkwood is the only other Tahoe resort with decent expert and big-mountain terrain. Squaw / Alpine has more in the way of expert terrain, but Kirkwood generally gets better snow, and more of it, due to its higher elevation and catchment area.

There are cornices, cliffs, chutes, bowls and glade riding to be found at Kirkwood. The top of the resort is framed by a long ridgeline which allows you to drop into great expert terrain along its length, including cliffs and rocky lines.

There are a couple of vomit-inducing straight-line chutes up here, where it’s too tight for turns so your only option is to gather up the courage to go at it straight. The famous one is the ‘Once is Enough’ chute which earns you serious credibility in the pub after work if you have hit this during the season.

Chair 10 has the toughest terrain on the mountain at ‘The Wall’.

Unfortunately, the resort is very spread out and there is generally a lot of traversing involved to get to the various runs. This can mean that, on your ride breaks, you need to spend a lot of time traversing, unless you just take the same runs under the lifts. Watch out also for the flat run-outs near the bottom of the hill which can mean a bit of skating, especially after a dump.

The beginner and intermediate terrain is in shorter supply at Kirkwood, with just a few areas in which to work on your technique. As the season progresses, you will want to quickly either get up the courage to tackle the tougher terrain, or arrive already as a fairly advanced rider, in order to get the most out of your season at Kirkwood. There are also a couple of nice backcountry options around the resort, including cat skiing options at Martin Point. 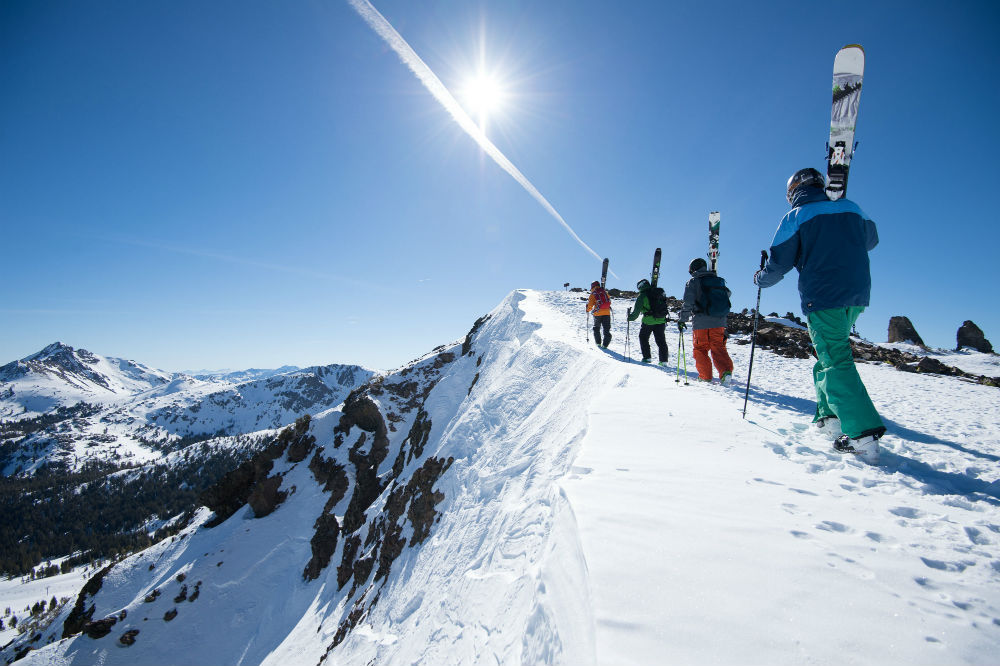 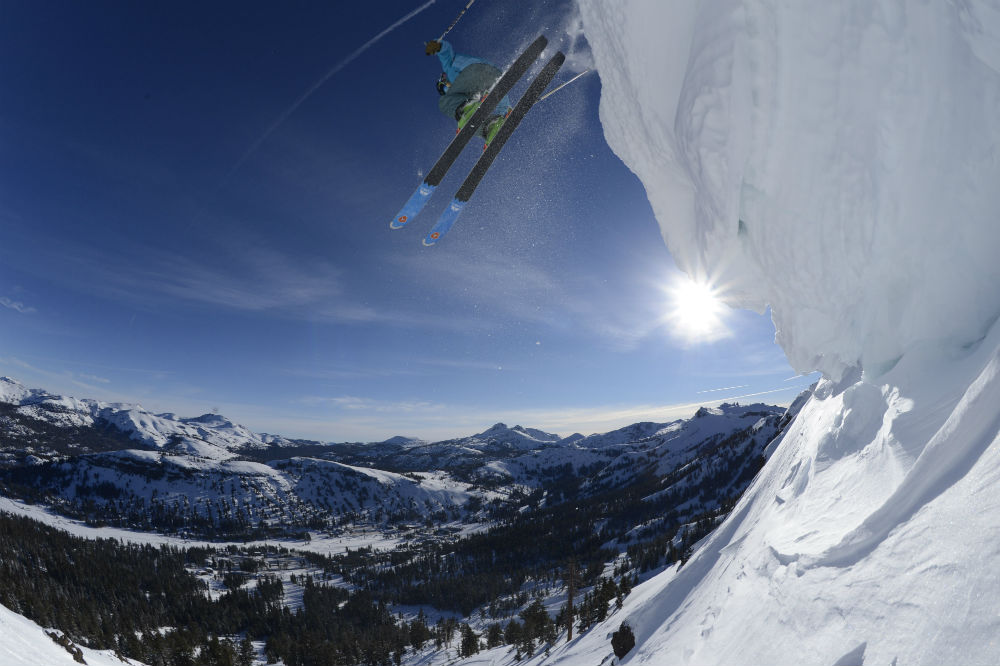 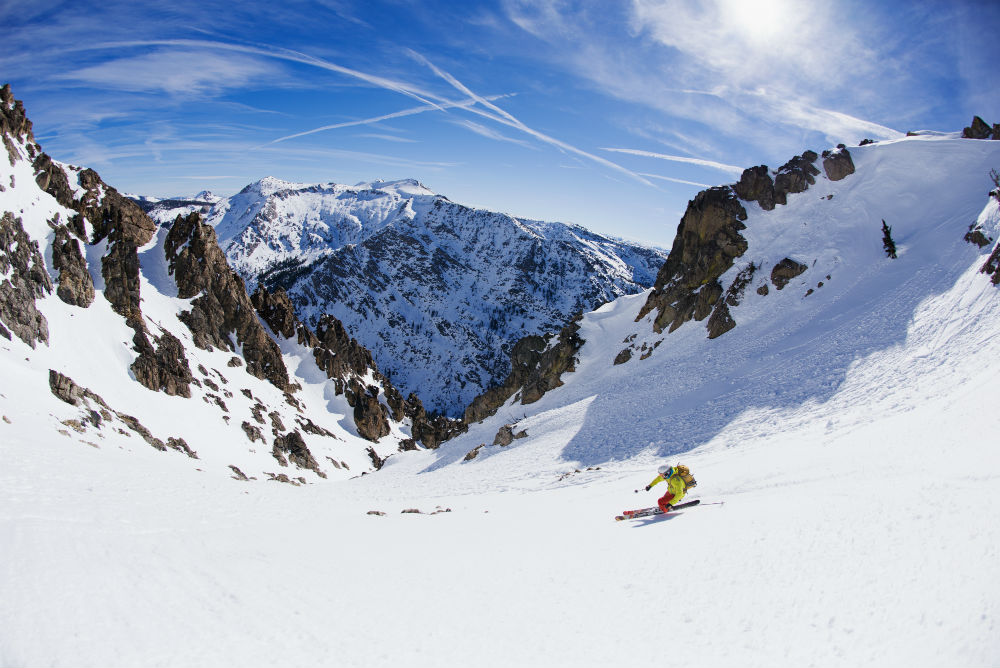 Snow and crowds are Kirkwood’s strong points. The snow is awesome, with an average of 354 inches (9 meters) over winter. It is also a little better than at other Tahoe resorts, mostly thanks to the higher elevation and location at the top of the Sierra Crest. However, the snow is still heavier than the snow compared in Utah and Colorado.

There are also fewer crowds at Kirkwood than the other popular Tahoe resorts given its more remote location. The lifts are a little slow, unfortunately, but this is generally ok given the relatively small number people coming to ride at Kirkwood compared to Squaw / Alpine, Heavenly and Northstar.

Kirkwood’s parks are more aimed at beginner and intermediate riders. They are best for when the riding conditions up on the hill aren’t great and you need a change of style – rather than being a drawcard in themselves.

There is a small park with boxes, jumps and rails and a medium park with bigger features and jumps.

Kirkwood is part of Vail Resorts mega-conglomeration of resorts, which includes Heavenly and Northstar in the Tahoe region, as well as Vail, Beaver Creek, Keystone and Breckenridge in Colorado, Park City in Utah, and Perisher in Australia.

Jobs for Kirkwood can be found at www.vailresortscareers.com. You can apply online, or simply walk-in to HR at 1501 Kirkwood Meadows Drive at the resort. They are quite good with ride breaks during the day, and the smaller crowds mean you have a better chance at Kirkwood of ride breaks than Heavenly or Northstar.

The Tahoe Daily Tribune has a classifieds list with jobs available in South Lake Tahoe. There are often seasonal jobs here, which means you could just buy an Epic pass, giving you access to Kirkwood, Heavenly and Northstar, while you work in a busy town with plenty on at night.

If you work for the resort, you get a free Epic pass, which includes free riding at Kirkwood, Heavenly and Northstar in the Tahoe area, as well as the other Vail resorts in Utah and Colorado.